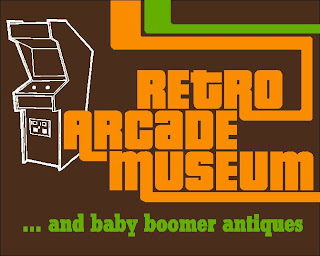 This afternoon I stepped back into a place I haven't visited regularly since I was a kid with newspaper delivery money burning a hole in my pocket. The outside of the building was nondescript, except for the unusual sign hanging from the second story. Inside, the light was dim, but even while my eyes were adjusting I could hear the muted sounds of roaring car engines, rifle fire, jets across the stratosphere, and chiming bells.  A faint aroma of warmed up electronics could be detected, like the smell of an AFX slot car set after a busy afternoon of racing -- and beyond the counter, vintage arcade games were arrayed in four rows, waiting to be played. Proprietor Fred Bobrow of the Retro Arcade Museum has assembled an amazing collection of working arcade games including pinball machines, road race games, and various sharpshooter and combat games that visitors can play to their heart's content after obtaining an appointment for a group or private party.

There are a few vintage video games, but for the most part these are mechanical marvels that use projection, mirrors, scrolling landscapes, physical game pieces and mechanical relays to simulate aerial bombing runs, moon landings, and grand prix action in the same way that stage magicians use trick cabinets and props to accomplish their illusions. After we arrived, Fred showed us a 1950s-style, back-room kitchen where we could put down our coats and where snack bags of popcorn and bottles of water were placed out for us, then proceeded to give us a quick tour of the games and how to activate them (no quarters or tokens required once you're inside the arcade -- just the joy of thumbing the start button and playing). Fred also has monitors set up out front (we had episodes of the Partridge Family screening during our visit) and a pc-based jukebox through which he'll do his best to accommodate your requests for background music during gaming.

The games are an amazing panoply of scenarios and mechanisms. Sega's Rifleman places you at the stock of a rifle and sight, through which you see a tiny image of a western saloon with bartender dutifully polishing a glass, patron, and a backshelf with 5 miniature target bottles. As you squeeze off each shot, the rifle recoils. After you've fired your complement of bullets, the results are displayed on a paper ticket with a facsimile of the target bottles, dutifully punched by the machine to reflect your shots, so that you can hold the ticket up to the light and gauge your scores against the bullseye rings via the holes in the paper.

Bally's Space Flight Game is a much neater variant of those pesky claw machines that plague movie theater lobbies, where instead of trying to grapple a plush Sponge Bob, you have to successfully land a lunar module on the cratered surface of the moon. The colors are beautifully lurid, with green stars on a purple-black backdrop, and NASA mission control staff chatter directions to you during the descent.

The Road Runner gives a bird's eye perspective of a grand prix race, with "jam cars" that you have to weave around and between endlessly scrolling towards you in changing combinations as you mash down the accelerator pedal. If your car strikes another racer, a mechanical arm flips you end over end and onto the shoulder, costing valuable points and time until you can get back up to speed and into the lanes again. There are a couple of bombing run games, such as Target Zero, that fly you above a landscape of high value targets and exude an insane, Cold War sort of aura. I was becoming the arcade equivalent of a backseat driver to my daughter (until she shooed me away) as she played: "Don't miss the bulk oil terminal there...OK, there's a factory...and the large bridge," and laughing inwardly at how bizarre the directions sounded. When we reached the rocket-on-the-launch pad target, all I could think of was a recent viewing of the 1953 version of "Invaders from Mars" and the stubby-winged interplanetary ship that was the target of the Martians' erstwhile sabotage attempts. The list of cool games goes on through about 40+ machines, including flying a barnstormer through a series of obstacles and lying in wait in the ocean depths with a sub full of torpedoes as target ships glide along the horizon line. Fred noted that his entire stock of machines, slumbering in a warehouse, is about 3X as large as the collection on-site, so we may see some swapping of machines over time to change things up.

The space itself is really neat, with colored sconces and laser displays tracing abstract patterns on the walls, framed vintage music posters and album covers, and a front area filled with display cases of vintage handhelds and consoles and funky games of strength such as Crush-the-Can. Check out the Retro Arcade Museum in scenic Beacon, New York as soon as you're able!
Posted by Len at 9:54 PM No comments:

To Lux Interior (raises glass), may God bless your trash culture-loving soul. You gave us some of the sweetest psychobilly madness ever to blare from a set of stereo speakers. You shared our love for old records and stripped down rock and roll. Whose life wasn't changed by even one listening of "Goo Goo Muck?" The world is a poorer place for your passing.
Posted by Len at 7:42 PM No comments:

The NBC New York 11 o'clock news has reported an earthquake in north-central New Jersey this evening. While they also noted that the earthquake had been confirmed by the U.S. Geologic Survey, an 'eyewitness' caller, former of California and now living in NJ, said the earthquake was like nothing he ever experienced on the west coast. The caller said that instead of the rolling shocks prevalent in California earthquakes, this phenomenon consisted of one abrupt shock to the upper floor of his house, accompanied by a loud, explosive sound from outside. Attempts by the authorities to cover this up aside, you and I both know that a UFO has crash-landed in NJ tonight. And no, this hypothesis has nothing to do with the fact that I recently picked up several volumes of "The X-Files Mythology Collection" on DVD at a deep discount, after Christmas sale at FYE. Even now, Lovecraftian terrors are boiling up out of fissures in the Ramapo Mountains to rescue the downed interstellar aviators.
Posted by Len at 8:17 PM No comments: